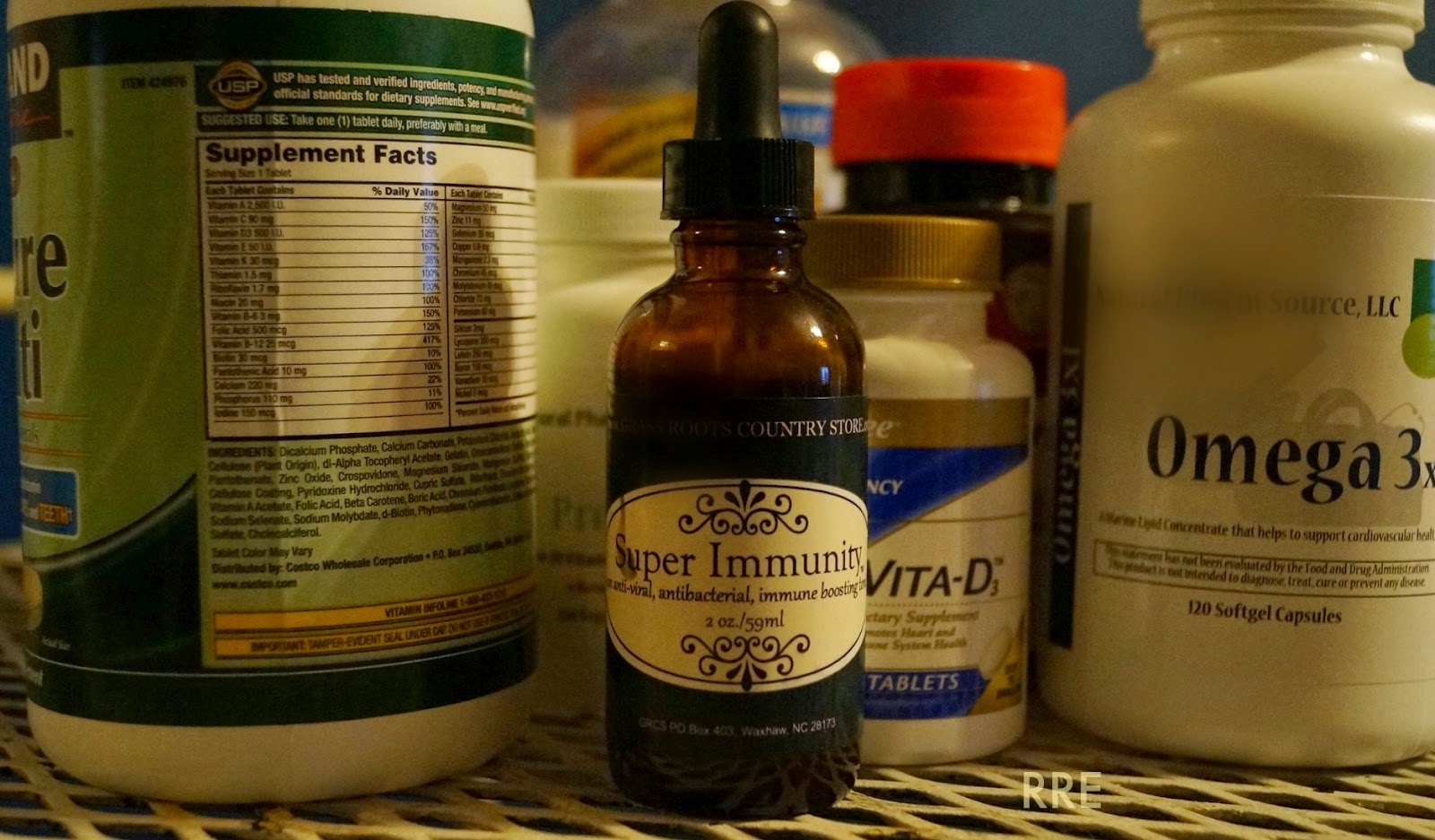 Super Immunity. No flu shots for us! Our basic supplements are:  multi-vitamins (adults' or kids' version); plus additional Vitamin C, Calcium/Magnesium/Zinc, Fish Oil and Vitamin D. We really love our Vitamin D-- the Sunshine Vitamin --  especially during Flu season! We've stuck to this formula for several years. We've had very good results. This is how it came about:  My husband had the misfortune of  taking a flu shot years ago,  and it made him feel awful and very sick for  several days afterwards. There has to be another way to ward-off the flu, he thought. Based on research on strengthening  immune systems, we chose the above  supplements (with the dosage adjusted for age/weight). We take them daily after a meal; along with drinking plenty of clean water.  We also wash our hands often, and stay away from obviously-sick people. That's it, and by the grace of God, it's enough.  None of us in the family has come down with any debilitating flu of any type for several years already. Thus, no doctor visits have been needed, and no (unnecessary) antibiotics have been taken.  Even our very few colds are short-lived.  Praise God for His care and provision; and the availability of information out there.  Do your own research and make the right decision for what would work for you and your loved ones!

'Twas the Night Before Finals

'Tis the season for school final exams.  Some kids are feeling a little nervous.  Not my kids, of course,  hehehe.  How about yours??

'Twas the Night Before Finals

T'was the night before finals,
And all through the college,
The students were praying
For last minute knowledge.
Most were quite sleepy,
But none touched their beds,
While visions of essays
Danced in their heads.
Out in the sports field,
There were some throwing,
In  hope that some exercise
Would get their brains going.
In my own apartment,
I had been pacing,
Dreading all those exams
I soon would be facing.
My roommate was speechless,
His nose in his books,
And my comments to him
Drew unfriendly looks.
I drained all the coffee,
And brewed a new pot,
No longer caring
That my nerves were shot.
I stared at my notes,
But my thoughts were all muddy,
My eyes went a'blur,
I just couldn't study.
"Some pizza might help,"
I said with a shiver,
But each place I called
Refused to deliver.
I'd pretty much concluded
Life is unfair and cruel,
Since our futures all depend
On grades made in school.
When all of a sudden,
Our door opened wide,
And Patron Saint Put-It-Off
Ambled inside.
Her spirit was careless,
Her manner was mellow,
She looked at the mess
And started to bellow:
"Why should us students
Make such a fuss,
About what those teachers
Toss out to us?"
"On Cliff Notes! On Crib Notes!
On Last Year's Exams!
On Wingit and Slingit,
And Last Minute Crams!"
Her message delivered,
She vanished from sight,
But we heard her laughing
Outside in the night.
"Your teachers won't flunk you,
So just do your best.
Happy Finals to All,
And to All, a good test."

*Thanks to Pastor Tim for this joke!*
http://www.cybersalt.org/entertainment

Famous: Do you recognize this 20th century painting?

First, I had almost completely forgotten that this world-famous work of art was located not far from home.  No need for me to go to Paris, NY or LA  for one of the most popular 20th century paintings ever.
Second, it is instantly recognizable -- many say as recognizable as the MONA LISA and The Scream. Third, the painting's popularity has caused it to be the most parodied painting in American pop culture.  Simply do an internet search and see for yourself. 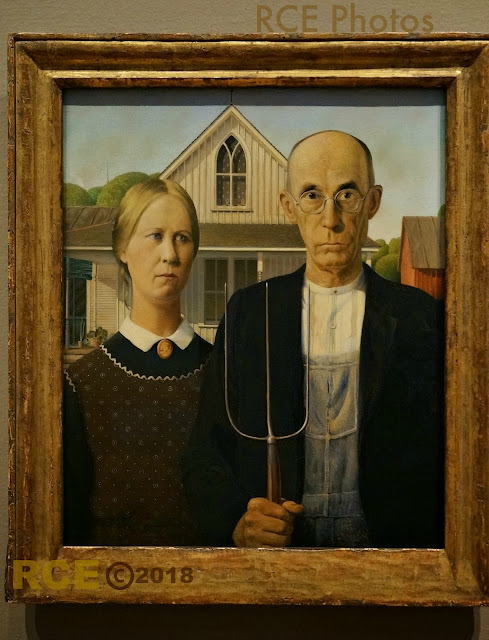 So, if you're a Chicagoan, stand proud that  AMERICAN GOTHIC (1930)  is part of the collection at  the Art Institute of Chicago (and, YES, they allow you to photograph this priceless piece as long as you do not use flash, and the picture is for your private use). Its painter, Grant Wood, was a graduate of the school, and had entered it at the institute's art contest.  He won the bronze medal and $300 cash;  the school bought his painting; and Wood became instantly famous.  He modeled the lady after his 32-year old sister, Nan; and the man after their dentist, 62-year-old Byron McKeeby.

The title of the painting refers to the style of house in the background.  The house is also known as the Dibble House and is located in Eldon, Iowa. Wood only observed the house once in 1930, made an initial sketching, and completed the painting (adding the people) at his studio in Cedar Rapids. 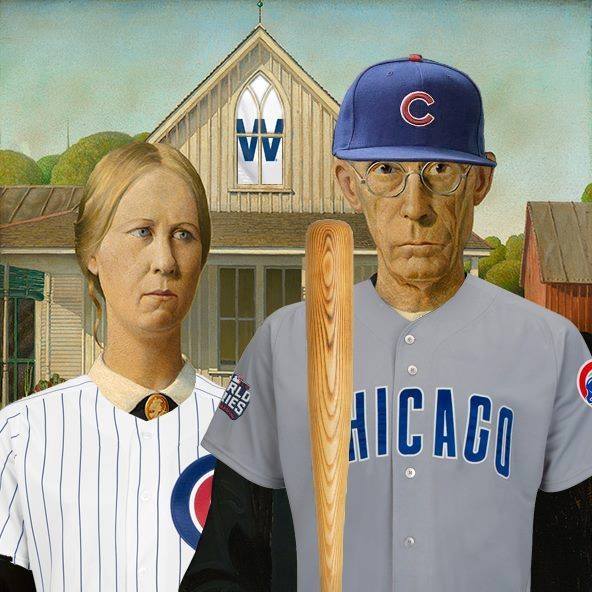 pc: the Art Institute of Chicago

Doris Duke & hubby bought the land for Shangri La near Diamond Head in Honolulu, HI in 1935. If I had been Miss Duke, I would have also bought much of the surrounding property to ensure the ultimate in privacy.  After all, what she paid back then must have felt like chump change for a billionaire like herself.  It cost her $125,000 for almost 5 acres -- the equivalent of $11,400,000 in  relative average income  that one would need in 2013  to buy a comparable piece of land. Aaaah, the many benefits of being ultra rich and making a good investment. For example, how would you like to be looking at the view below as you dined from your lanai? 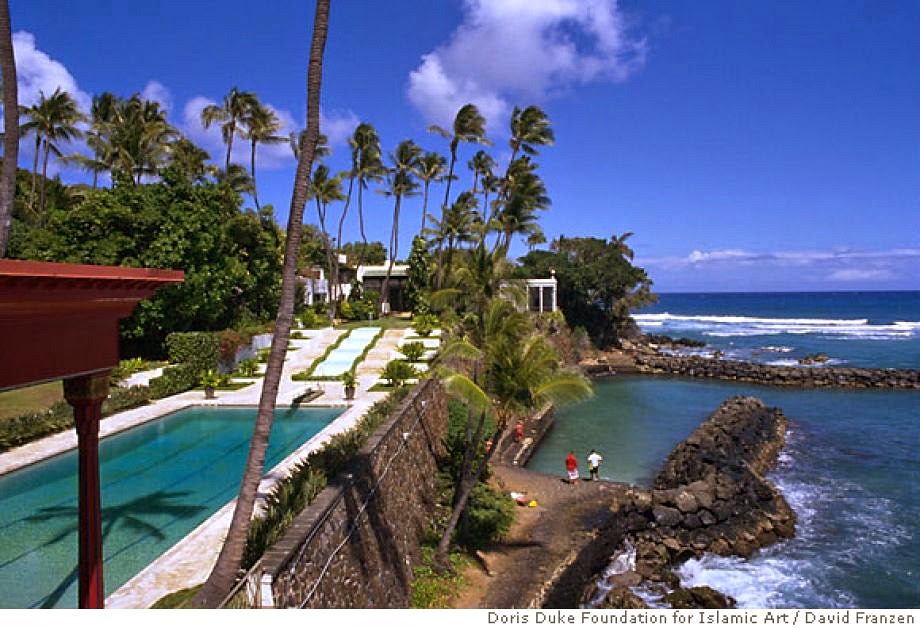 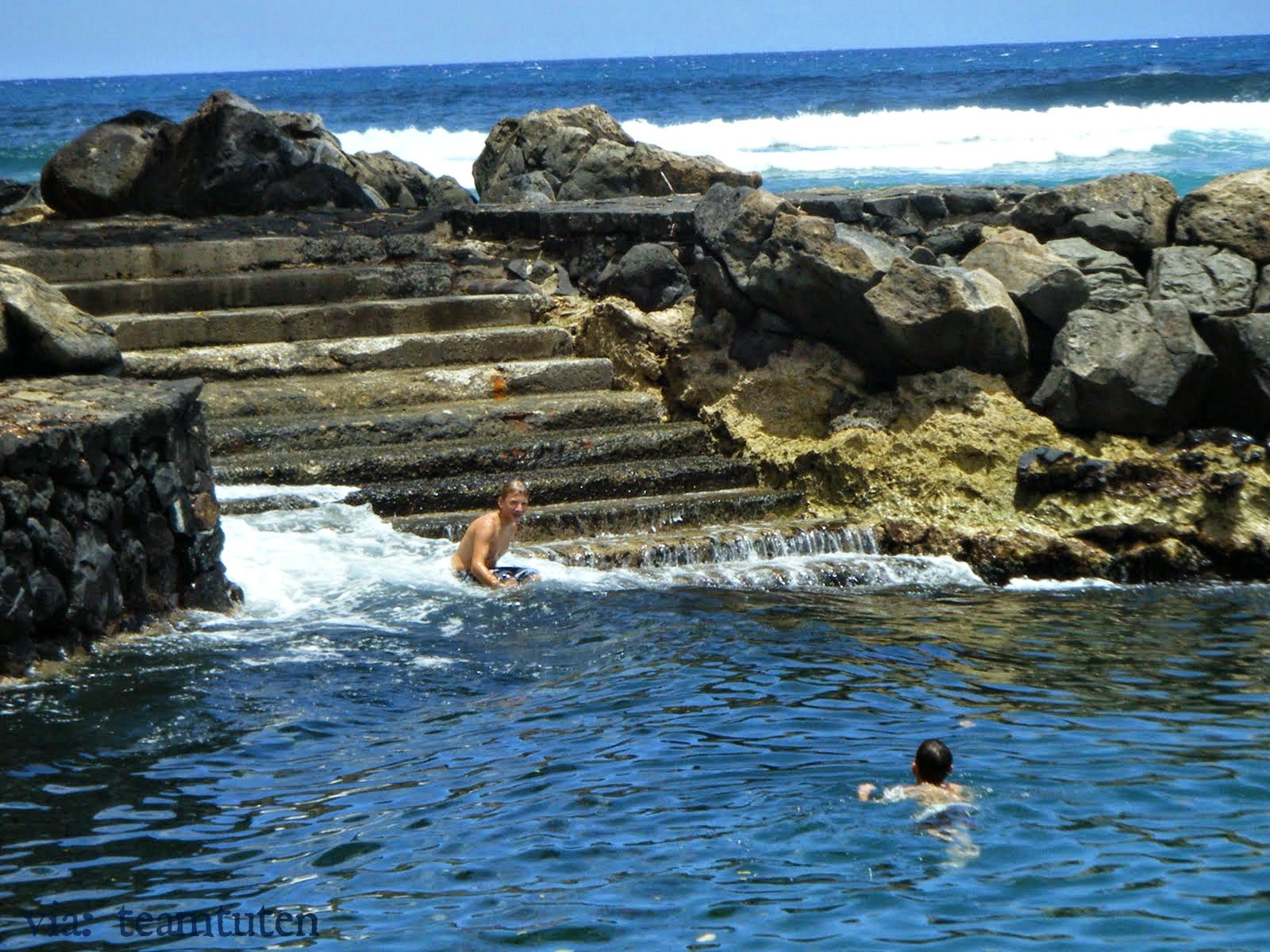 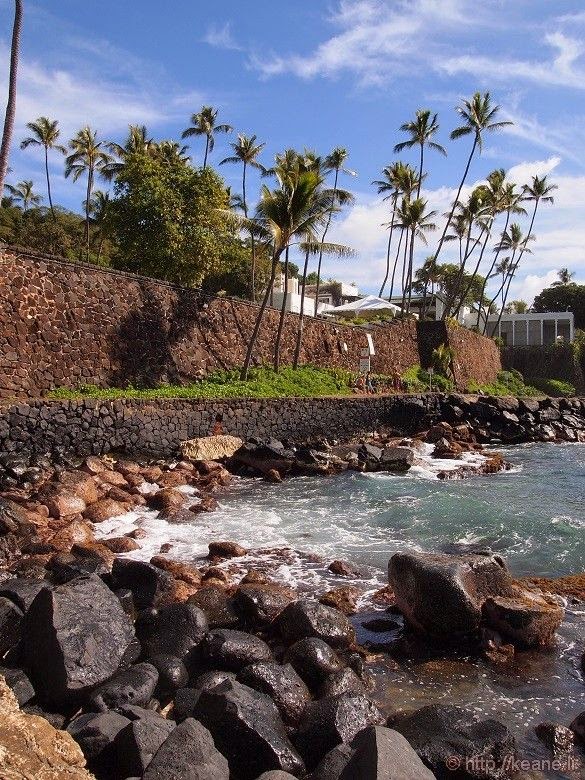 Note:  Because of injuries/lawsuits in the past that the Doris Duke Foundation has had to pay, there was a fence installed in April 2014 that closes off the harbor from divers. 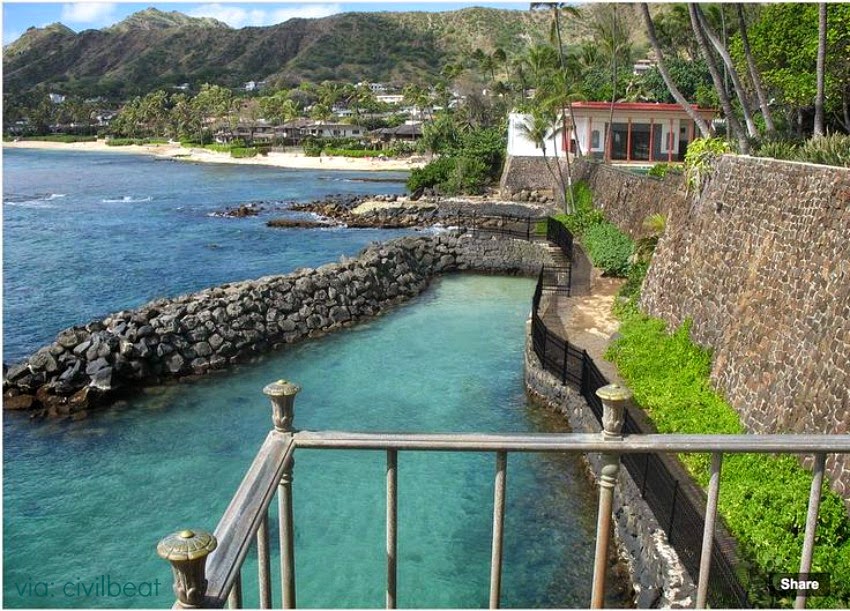 Shangi La's façade fools you into thinking, if you do not know any better, that this is just another ordinary house. However, between the smiling camels is a single door (inscribed with sayings that greet those who enter with good things) which leads to a colorful, wonderfully furnished and designed home that showcases all things beautiful in Islamic art.

Look at the picture of the entry foyer below!  What a feast to the eyes.  The coffered painted ceiling was specially made in Morocco. Six hundred Iznik (name of town) Turkish tiles cover the walls.  The 84 Spanish-style colored glass windows repeat their pattern every 4th time. The docent said they were especially beautiful when the sunlight hits them just right. There are wood chests from India, Central Asia, Iran and Syria.


At this early point of the tour, we were encouraged to put our purse or backpack or whatever into  the house's "secure" area (read big-bin-with-lock located in the guard's office).  We were also given a much-needed hand fan resembling the hand fans below which resulted in  both of my hands being burdened.  The dilemna pretty much made my decision to leave my expensive Bottega Veneta bag with the guard that much easier. The Lord answered my silent prayer for the BV's safety.  Too bad I didn't pray for my free fan as it got lost after the tour while I browsed the Honolulu MOA.

ETA: The staff's insistence on us tourists letting go of our bags is very likely security related, and not just for the purpose of our comfort as we continue the tour. It would make it that much more difficult to steal  anything (and hide it) from the estate if one were so inclined.  As a Christian, that thought never even crossed my mind. 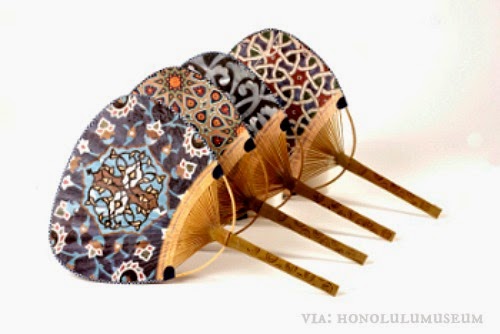 I will do a couple more posts on Shangri La. There are too many things still worth noting about this beautiful house.   Continued    HERE...
at December 02, 2014