Additional documents were recently released on President John F Kennedy's assassination. This "Chanel" suit was worn by FLOTUS, Jackie Kennedy, when it happened.  The POTUS had liked the suit and wanted her to wear it to Dallas.  She wore the suit at least 6x prior to the Dallas event.

It is a strawberry-pink wool bouclé double-breasted suit with navy trim, matched with a pillbox hat.  Mrs Jacqueline Kennedy was encouraged as FLOTUS to Buy American, so the parts of the suit came from Chanel, Paris; but the outfit was actually assembled by  Chez Ninon, NY.

The Public has not seen the blood-stained suit since the horrid days in TX.  It was stored away soon after the assassination and eventually sent to the National Archives via Jackie's mother.  It was officially and legally donated to the United States by daughter Caroline,  Jackie's sole heir, in the year 2003.  It came with a stipulation:  it cannot be publicly displayed for 100 years.  The reason?  So as not to "... in any way to dishonor the memory of the late President or cause unnecessary grief or suffering to members of his family."

None of us reading this will be here in the Year 2103.  But it will likely be seen by our children's grandkids, Lord willing.  It will look amazing and almost new as the suit and accessories (bag, stockings, but not the white gloves or the hat) are stored in an acid-free, custom-made box with temperatures between 65-68 degrees Fahrenheit. The humidity level is kept at 40%. The air is changed daily @ 6x per hour.  Environmentally perfect! 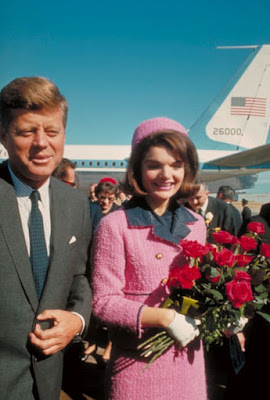 
12 Fascinating Facts About the Pink Suit